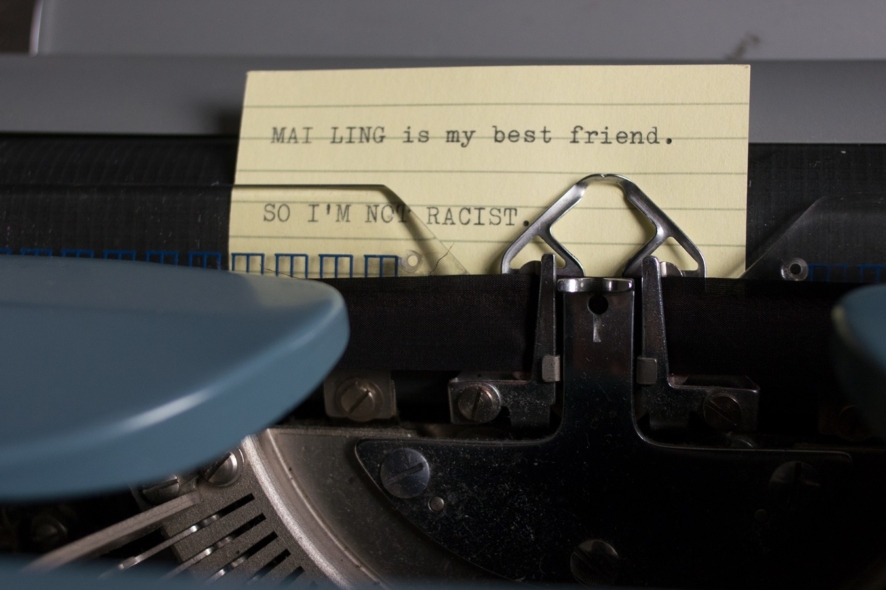 1. How and why did you start the Mai Ling Collective? Which inspi­ration keeps you going?

Mai Ling 1: The founding of the asso­ciation MAI LING began with the idea and eagerness to exchange with Asian migrants living in Vienna. Many female Asians were expressing their dif­fi­culties living in Austria — that was often a matter of sur­vival. Although all migrants face racism in their day-to-day lives, Asian women also expe­rience sexism. The com­bi­nation of racism and sexism made it harder for us to live here.

Last year, I wanted to interview Asian migrants about their lives so I asked Mika, a friend and member of Mai Ling, if she was inte­rested in orga­nising a meeting with all Asian artists that she knew of and were living here. Before the meeting, we didn’t have in mind that we would find an asso­ciation and artist collective, however, after our first meeting, we rea­lised the necessity of for­ma­lising our com­mitment to regu­larly gather and exchange. From then onwards, we founded Mai Ling, an artist collective and asso­ciation with the focus on Asian women living in Austria.

The artist collective aimed to make our exis­tence visible by fos­tering the reco­gnition of our voices. As I men­tioned before, Asian, female and LGBTQ com­mu­nities face an inter­sec­tional layer of racism, sexism, homo­phobia and other forms of pre­ju­dices in their daily lives. Unfortunately the know­ledge about us is insuf­fi­cient and is often repre­sented through white lenses. For this reason, the con­di­tions, nar­ra­tives, chal­lenges and embodied expe­ri­ences are not taken into con­si­de­ration. This is because struc­tu­rally, we are excluded from the main­stream dis­course and we lack plat­forms for repre­sen­tation. My biggest moti­vation for working as a member of Mai Ling is to find an outlet for my anger and frus­tra­tions when it comes to day-to-day racism and sexism.

Mai Ling 2: When we first founded Mai Ling, we had our first public event <Who is Mai Ling?>, during which we dealt with the cha­racter Mai Ling as no one knew who she was — she is me, she is us, but also not. My name isn’t Mai Ling. The crossing of iden­tities and the self-denial of Mai Ling inspired us and the way we worked as diverse artists and rese­ar­chers in the cul­tural scene.

Many of us were seriously aware of the chal­lenges living as an Asian woman in Europe. We knew from our expe­ri­ences that the voice of one person is often for­gotten and that is why we chose to use the complex figure Mai Ling. She is a figure whose identity is con­stantly in flux and being redefined.

2. How would you translate/transfer the „speaking“ or „talking back“ of Mai Ling into your everyday life?

Mai Ling 1: After I started to work as Mai Ling, I stopped per­so­na­lising the racist/sexist expe­ri­ences I had as I knew it hap­pened to Asian females in one form or another. We had created a space where we felt safe and understood. At the same time, I felt a sense of kinship with Asians and we wanted to show our soli­darity with each other.

Mai Ling 2: Mai Ling is the name of our artist collective/association and natu­rally, all our art­works are signed under this name. We decided to do this because Mai Ling in Gerhard Polt’s sketch sym­bo­lised a figure that crossed over various Asian coun­tries and thus cul­tural ste­reo­types. As a group with members from dif­ferent East Asian coun­tries, we wanted to reclaim the figure of Mai Ling and give her our own voice.

The anonymity of Mai Ling also lends us certain power to be radical and, at the same time, we can hide behind a figure whose identity is con­stantly being rede­fined. With many members of Mai Ling being first generation migrants, anonymity also acts as a form of pro­tection so that our acti­vistic work does not clash with existing bureau­cratic challenges.

3. How did your life change since the corona-virus media debates started?

Mai Ling 1: My first lan­guage is neither German nor English and, for this reason, I received rela­tively scarce infor­mation about the Covid-19 deve­lo­p­ments. But I am already expe­ri­encing the effects of the Covid-19 media debates. Although there is racism and sexism in my daily life in Vienna, I never had to be afraid to go outside. Since Covid-19, I pre­ferred to not go outside, not because of the fear of infection, but rather, the reac­tions from strangers whenever they saw me.

Mai Ling 2: My daily life didn’t dra­ma­ti­cally change since Covid-19. There was already racism and pre­judice towards Asian people before this crisis. However, Covid-19 media debates made racism more visible and we wit­nessed more hate speeches towards Asian people. It felt like a social threat.

Mai Ling 3: I became hyper-sensitised to my sur­roun­dings and espe­cially towards the “white gaze”. Although the gaze is some­thing I expe­ri­enced already before Covid-19, this time it was more severe and it also esca­lated into looks of disgust. Different forms of micro­ag­gres­sions esca­lated and it is exhausting to have to go about our daily lives with the alertness in mind that we might be racially attacked for looking “Asian”.

4. Do you have any new upcoming pro­jects you would like to tell kori­en­tation & friends about?

Mai Ling 1: A cooking project with Migrant Kitchen in Vienna and we will show our audio and video works in the Fluctoplasma fes­tival in October. Next year, we plan to have an exhi­bition in VBKÖ.

Mai Ling 2: I am looking forward to the exhi­bition that we are going to organize next year. The exhi­bition was planned for February 2021, but that will pro­bably be post­poned. We will work both as an artist and as a curator. I am very excited and curious about how this exhi­bition will turn out and show our per­spec­tives as Mai Ling. 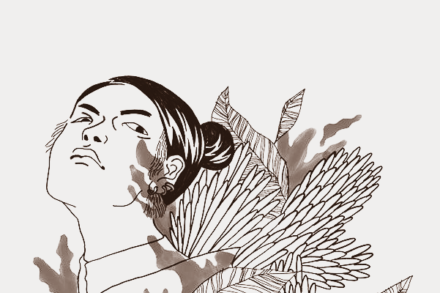 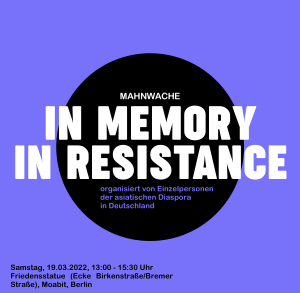 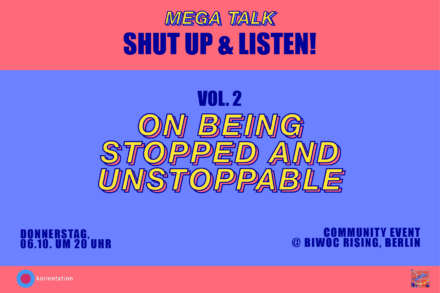